DYKE, A Quarterly, No. 1: Dykes Behind Bars by Women Against Prison

DYKES BEHIND BARS by Women Against Prison 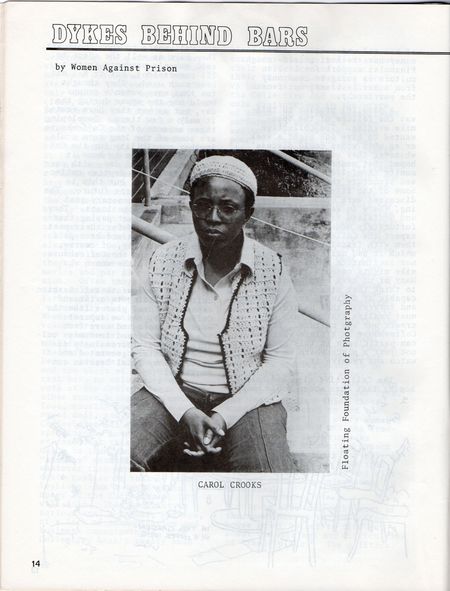 Carol Crooks, Floating Foundation Of Photography in DYKE A Quarterly No. 1 p. 14 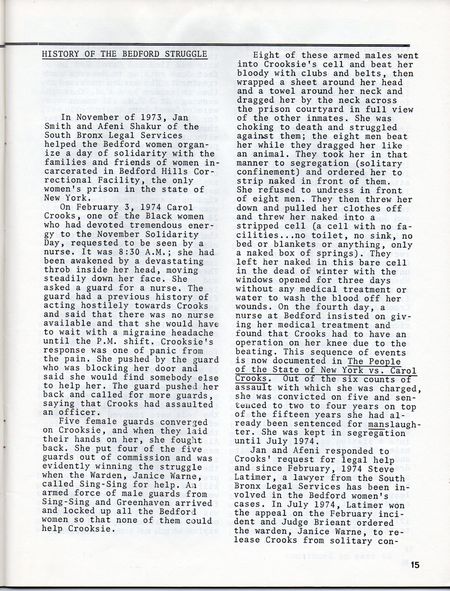 History Of The Bedford Struggle

In November of 1973, Jan smith and Afeni Shakur of the South Bronx Legal Services helped the Beford women organize a day of solidarity with the families and friends of  women incarcerated in the Bedford Hills Correctional Facility, the only women's prison in the state of New York.

On February 3, 1974 Carol Crooks, one of the Black women who had devoted tremendous energy to the November Solidarity Day, requested to be seen by a nurse. It was 8:30 A.M.; she had been awakened by a devastating throb in her head, moving steadily down her face. She asked a guard for a nurse. The guard had a previous history of acting hostilely towards Crooks and said that there was no nurse available and that she would have to wait with a migraine headache until the P.M. shift. Crooksie's response was one of panic from the pain. She pushed by the guard who was blocking her door and said she would find somebody else to help her. The guard pushed her back and called for more guards, saying that Crooks had assaulted an officer. 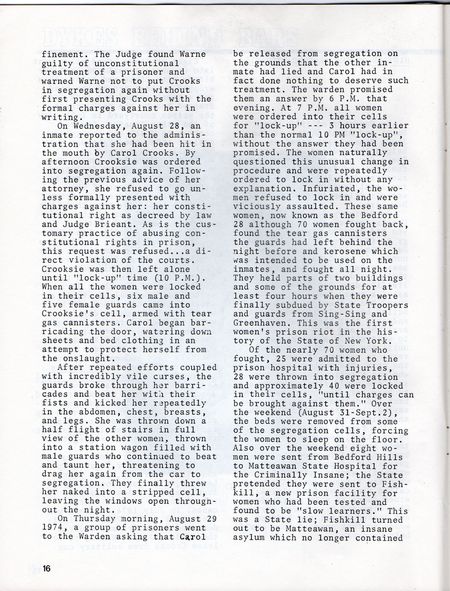 On Thursday morning Aug 29, 1974 a group of prisoners went to the warden asking that Carol be released from segregation on the grounds that the other inmates had lied and Carol had in fact done nothing to deserve such treatment. The warden promised them an answer by 6P.M. that evening. At 7 P.M. all women were ordered into their cells for "lock-up" ---3 hours earlier than normal 10 PM lock up, without the answer they had been promised. the women naturally questioned this unusual change in procedure and were repeatedly ordered to lock in without any explanation. Infuriated, the women refused to lock in and were viciously assaulted. These same women, now knows as the Beford 28 although 70 women fought back, found the tear gas canisters the guards had left behind the night before and the kerosene which was intended to be used on the inmates, and fought all night. 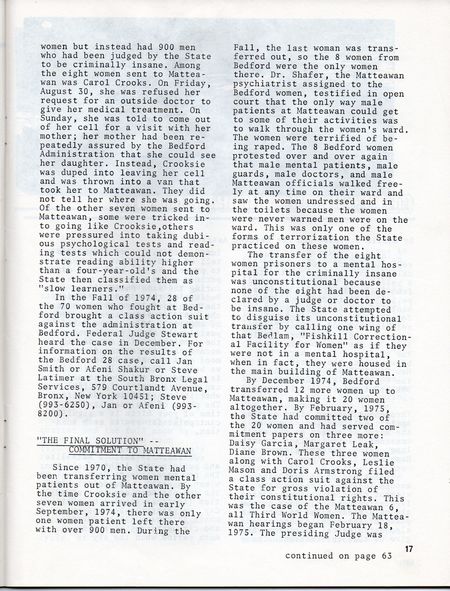 Since 1970, the State had been transferring women mental patients out of Mattewan. By the time Crooksie and the other seven women arrived in early September 1974, there was only one woman patient left there with over 900 men. During the Fall, the last woman was transferred out, so the 8 women from Beford were the only women there. Dr. Shafer, the Mattewan psychiatrist assigned to the Bedford women, testified in open court that the only way male patients could get to some of their activities was to walk through the women's ward. The women were terrified of being raped. The 8 Bedford women protested over and over again that male mental patients, male guards, male doctors and male Mattewan officials walked freely at any time on their ward and saw the women undressed and in the toilets because the women were never warned men were on the ward. This was only one of the forms of terrorization the State practiced on these women. 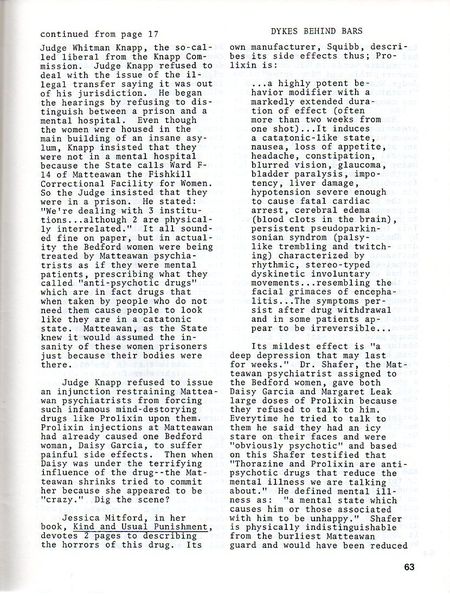 Judge Knapp refused to issue an injunction restraining the Mattewan psychiatrists form forcing such mind-destroying drugs like Prolixin upon them. Prolixin injections at Mattewn had already caused one Bedford woman, Daisy Garcia, to suffer painful side effects. Then when Daisy was under the terrifying influence of the drug - the Mattewan shrinks tried to commit her because she appeared "crazy." Dig the scene? 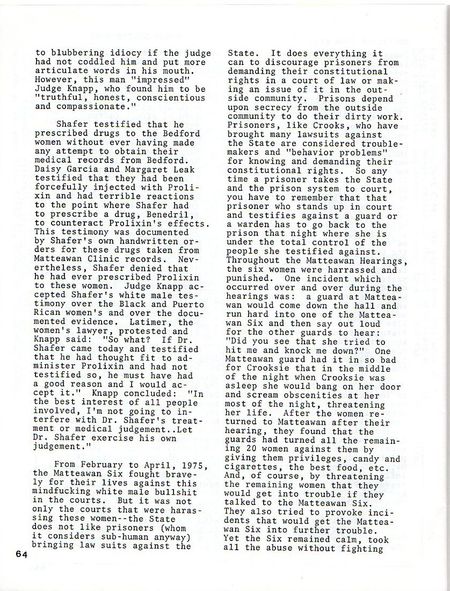 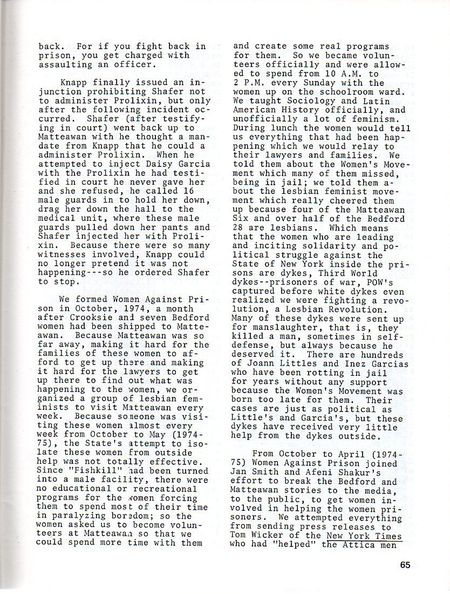 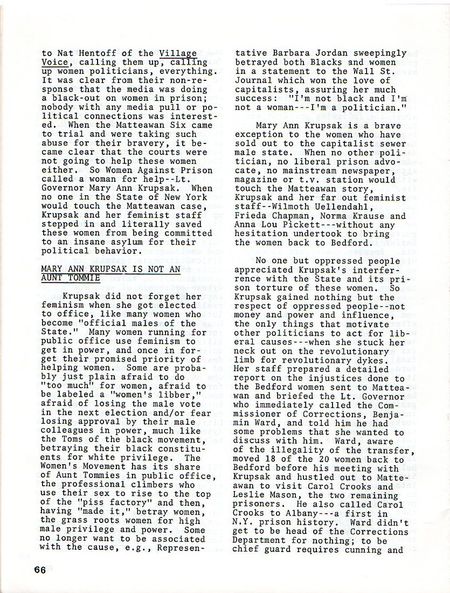 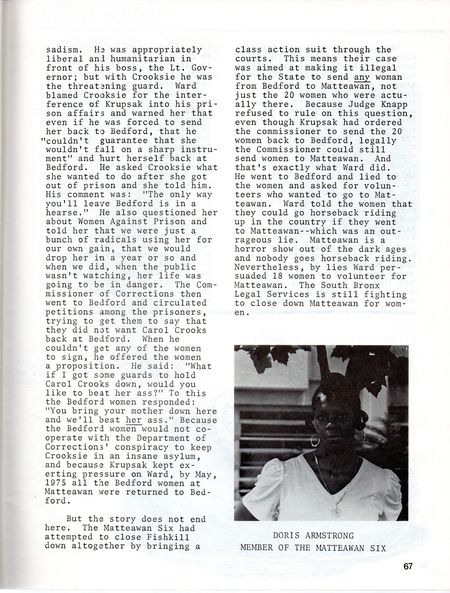 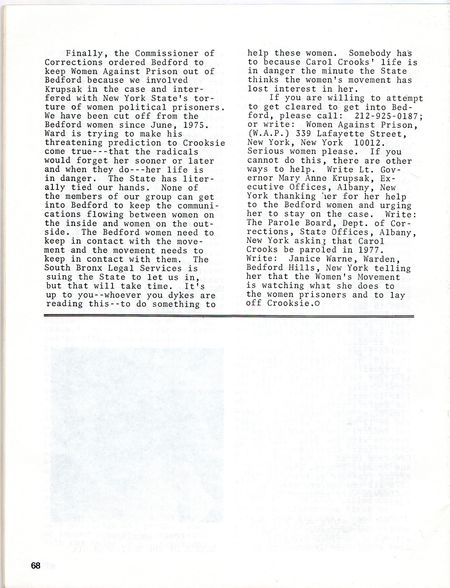