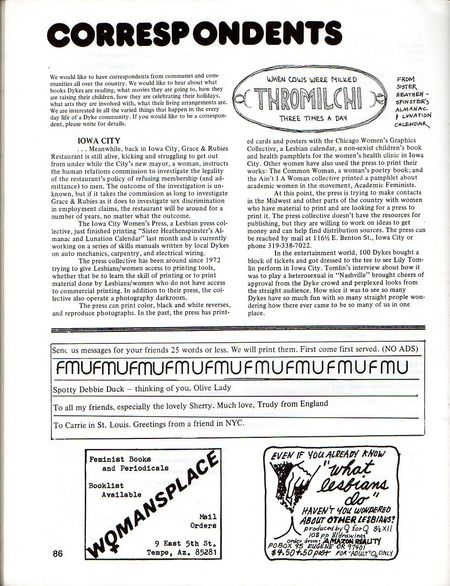 click on image to enlarge. Edited text in grey, below:

....Meanwhile, back in Iowa City, Grace & Rubies Restaurant is still alive, kicking and struggling to get out from under while the City's new mayor, a woman, instructs the human relations commission to investigate the legality of the restaurant's policy of refusing membership (and admittance) to men. The outcome of the investigation is unknown, but if it takes the commission as long to investigate Grace & Rubies as it does to investigate sex discrimination in employment claims, the restaurant will be around fo a number of years, no matter what the outcome.

The press collective has been around since 1972 trying to give Lesbians/women access to printing tools, whether that be to learn the skill of printing or to print material done by Lesbians/women who do not have access to commercial printing.  In addition to their press, the collective also operate a photography darkroom.

The press can print color, black and white reverses, and reproduce photographs. In the past the press has printed cards and posters with the Chicago Women's Graphics Collective, a Lesbian calendar, a non-sexist children's book and health pamphlets for the women's health clinic in Iowa City. Other women have also used the press to print their works: The Common Woman, a woman's poetry book; and the Ain't i A Woman collective printed a pamphlet about academic women in the movement, Academic Feminists.

At this point, the press is trying to make contacts in the Midwest and other parts of the country with women who have material to print and are looking for a press to print it. The press collective doesn't have the resources for publishing, but they are willing to work on ideas to get money and can help find distribution sources. The press can be reached by mail....

In the entertainment world, 100 Dykes bought a block of tickets and got dressed to the tee to see Lily Tomlin perform in Iowa City. Tomlin's interview about how it was to play a heterosexual in "Nashville" brought cheers of approval from the Dyke crowd and perplexed looks from the straight audience. How nice it was to see so many Dykes have so much fun with so many straight people wondering how there ever came to be so many of us in one place. 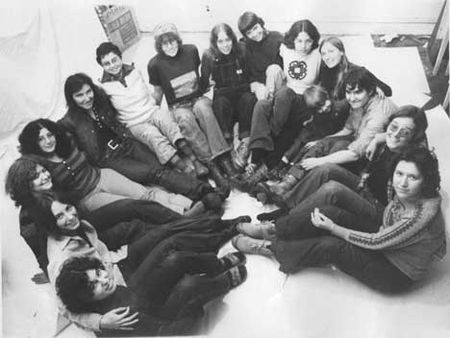 Almost every Lesbian household we visited in those days had at least one poster from the Chicago Women's Graphics Collective. This was a favorite of ours. Horses, Amazons and Dykes. Who could resist? Not us.

For more on The Chicago Women's Graphics Collective see HERE Michelle Moravec, Towards a Revolutionary Women's Culture, The Politics of Women's Culture.