Review of DYKE, A Quarterly from The Lesbian Tide "DYKE STRIKES OUT'

The Lesbian Tide, a magazine from Los Angeles, really hated us! Here's their review of Issue No. 1: Review of DYKE in The Lesbian Tide, March/April 1976

Dyke purports to be a separatist magazine reporting "analysis, communication and news" of Lesbian culture. What it is in fact is a vehicle for the personal ramblings of its two editors (high-school diary style) and a mishmash of politically naive thinking they call Dyke Separatism.

Separatism, as espoused by Dyke, is a luxury item for the privileged few. For those that can afford it, the best I can say is "Gee whiz, you lucky dykes sure do have a great life". For the rest of us, its crucial lack of awareness of lesbian and women's oppression is classist, ignorant and infuriating. Two examples of this are chronicled in the section called "California Diary."

One is an incident where the two right-on dykes ask a stewardess if she wouldn't be more comfortable in pants, instead of her mini-skirt uniform, and are surprised at her taking offense. She's probably be most comfortable being independently wealthy and quitting that oppressive job where she has to grovel to travelers all day long for crumby money. The issue of pants does not exactly speak to her oppression, since she can't control PSA's requiring stewardesses to dress like sex objects, nor change the fact that she needs the job to survive. How'd they miss the point?

We were both angry and highly amused by this review. Puzzled too. How could the author not get that the one of the things that made the stewardesses job oppressive was that she was forced to wear hot pants? Meanwhile, unbeknownst to The Lesbian Tide, stewardesses themselves were claiming their own power, organizing and changing the rules

Another interesting misuse of separatism is their report of visiting a local feminist bookstore and finding a man (of all things) shopping there. They harass him and finally make him leave. What that accomplished was that it lost the bookstore some money. Six women's livelihoods depend on that bookstore, and in these pre "Lesbian Nation" times men's money has the same buying power as women's. The bookstore is glad to rip it off and  re-filter it into  alternative jobs for women.

Well, as a retailer myself, now, I don't think I'd appreciate my customers harassing other customers, which is certainly what we were doing, as reported in "California Diary." It was interesting, though, that the author felt that selling things to men was "ripping them off" but selling  the same things to a woman was not a ripoff.  Interesting attitude for a retailer.

The worst part of the critique, however, was that the author failed to mention that she was a co-owner of Sisterhood Bookstore. Because we believed so strongly in situated knowledge and transparency, this kind of false - if implied- claim to objectivity really stunned us.

Here's our (rather hot headed) response, which they probably published, or published some of. Click on the thumbnail image and the bigger page will pop up. You can double click to enlarge even more. 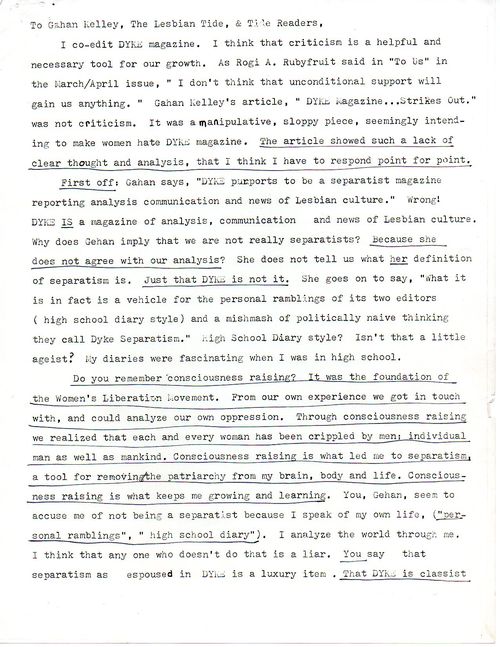