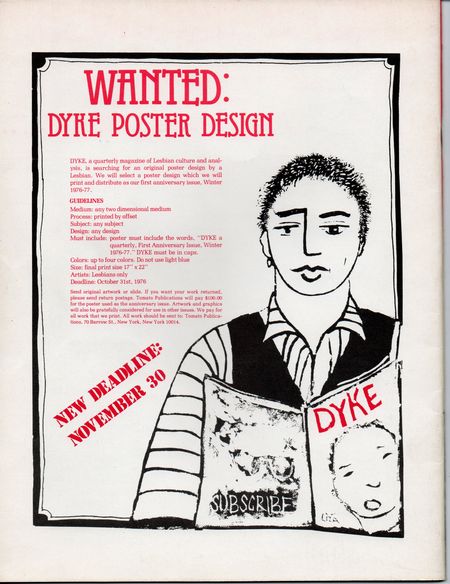 DYKE, a quarterly magazine of Lesbian Culture and analysis, is searching for an original poster design by a Lesbian. We will select a poster design which we will print and distribute as our first anniversary issue. Winter 1976-1977 It had always been our intention to vary the format of DYKE, A Quarterly. We were influenced by Aspen Magazine, founded in 1965 by Phyllis Johnson, a former editor of Women's Wear Daily and Advertising Age. In 1965 we were still Juniors in high school, but someone in one of our familes or a frend's family had a subsciription, which we'd gleefulley read.

"Each issue came in a customized box filled with booklets, phonograph recordings, posters, postcards - one issue even included a spool of Super-8 movie film.

"While wintering in Aspen, Colorado, she got the idea for a multi media magazine, designed by artists, that would showcase 'culture along with play.' So in the winter of  1965 she published her first issue. 'We wanted to get away from the bound magazine format, which is really quite restrictive,' said Johnson

"Each issue had a new designer and editor. 'Aspen,' Johnson said, should be a time capsule of a certain period, point of view, or person.' " Aspen stopped publishing in 1971.  SOURCE

We decided that our first foray into a different format would be a poster. We both loved the poster format. There were Lesbians working as poster designers at the time, notably The Chicago Women's Graphics Collective whose work we admired greatly. 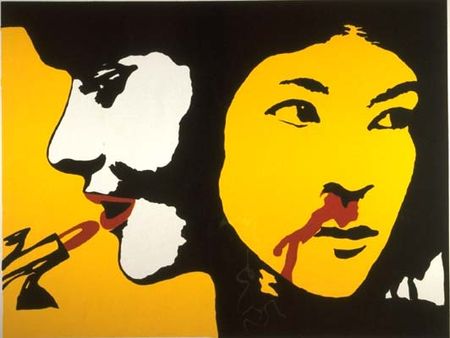 Rather than commissioning a poster from the Graphics Collective, we decided to open it up to our readers as a competition. We advertised with a flier, sent around the country to individuals and Lesbian venues, as well as the back page of Issue No. 4.

The graphic on both is by Liza Cowan, using an resist technique of poster paint and India Ink. And yes, it was supposed to look somewhat like a WANTED poster. 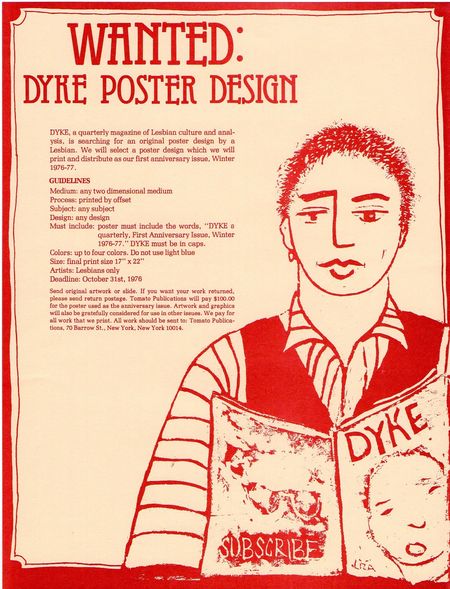 Flier for DYKE A Quarterly Poster Issue. 1976, design and drawing by Liza Cowan.