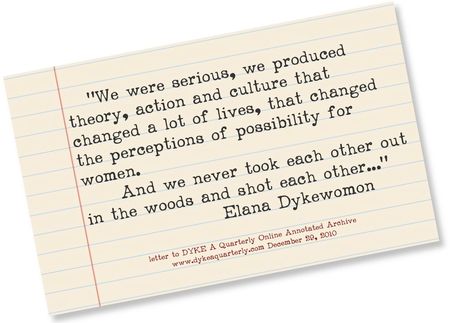 I asked Elana Dykewomon if she would write a few words about DYKE A Quarterly, and a bit about her life today. Elana was an occaisional contributor to DYKE A Quarterly and a huge presence in the cultural landscape of 1970's Lesbian Feminism in the USA.

Elana's novel Riverfinger Woman was required reading as soon as it was published in 1974. At the time she was using her given name, Nachman, which she later updated to Dykewomon.

Historically, it was only five minutes ago, but a lot has happened in those five minutes. So much of our energy did, in fact, change the world -- yet there's so much left to do. That's not news. Every generation of idealists needs to make peace with their youthful zeal and continuing impulse to hope, and posting the actual artifacts of the time helps.

I'm still... working. Though many things have slowed me, the worst was recovering from the infighting of the late 70s (a period I refer to as the "great dyke wars"). But I am long since recovered -- after all, I edited Sinister Wisdom for seven years, worked on senior/disability access for the SF Dyke March until last year, am on several boards, give writing workshops for lesbians locally and keep participating ("participating," I've decided, is the key to staying/feeling alive).

Dyke magazine was an important part of the dialogue of the 70s -- and looking at it again I remember how engaged we were with each other in print, how our publications were, in fact, "underground" -- invisible and incoherent outside of lesbian communities. We felt each other deeply and took our positions seriously. In the first issue of Sinister Wisdom for which I was editor, we published a poem of Adrienne Rich's that had words to the effect of: no matter how I disagreed with you, I always read you.

What I often observe in women writing about the 70s now is a casual dismissal of what we did (we were all stoned, white, middle class...too wrapped up in ourselves to have an impact). That this parrots the "above ground" portrayals of lesbian radicalisms and feminisms seems to go unnoticed. We were serious, we produced theory, action and culture that changed a lot of lives, that changed the perceptions of possibility for women. And we never took each other out in the woods and shot each other (which male radical movements often do...). Even when we had guns -- and some of us did (now most of us espouse a radical pacifism).

I have an essay about lesbian utopian visions in the current issue of Trivia online: http://www.triviavoices.net/current/dykewomon.php  ("Walking on the Moon").
And I have a website that gets updated a couple times a year: www.dykewomon.org

I have a lot of hope that lesbian life, energy, vision goes on -- it's for every generation to write their own chapter. And I'll keep reading...

Wishing you peace and inspiration, 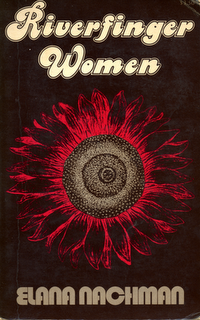 Some of Elana Dykewomon's books. Click smaller image to enlarge.