DYKE A Quarterly
Home Facebook About DYKE
DYKE A Quarterly No 3, p.2. Contents, Masthead
SIDE TRIP: Lesbian Separatism in Cowrie and DYKE, a paper by Margo Thompson 2011

Aunt lute, A Multicultural Women's press, is publishing stories and memoirs of second wave feminists. Fascinating. Do check them out. Here's a snip from activist poet Maggie Jochild....read it then click through to the full piece at aunt lute

As 1978 began, I was living in a lesbian-separatist land collective outside Durango, Colorado. I was 22 and voraciously reading the output of wimmin’s presses. When the two collective members I was closest to announced they wanted to leave, head for a city, I threw in my lot with them: I wanted to be where the action was. And where uncoupled dykes could be found.

We settled on the Bay Area for two main reasons: We had read there was a group that was arranging for the fostering of lesbian teenaged runaways by older dykes, and we wanted to offer our reconfigured household for that effort. We also read somewhere (Lesbian Connection, maybe) that a group of wimmin, presumably dykes, were kidnapping and castrating repeat rapists, then dumping them on the steps of S.F. General. We hoped to plug into that activity. We each had deeply personal reasons for doing so. 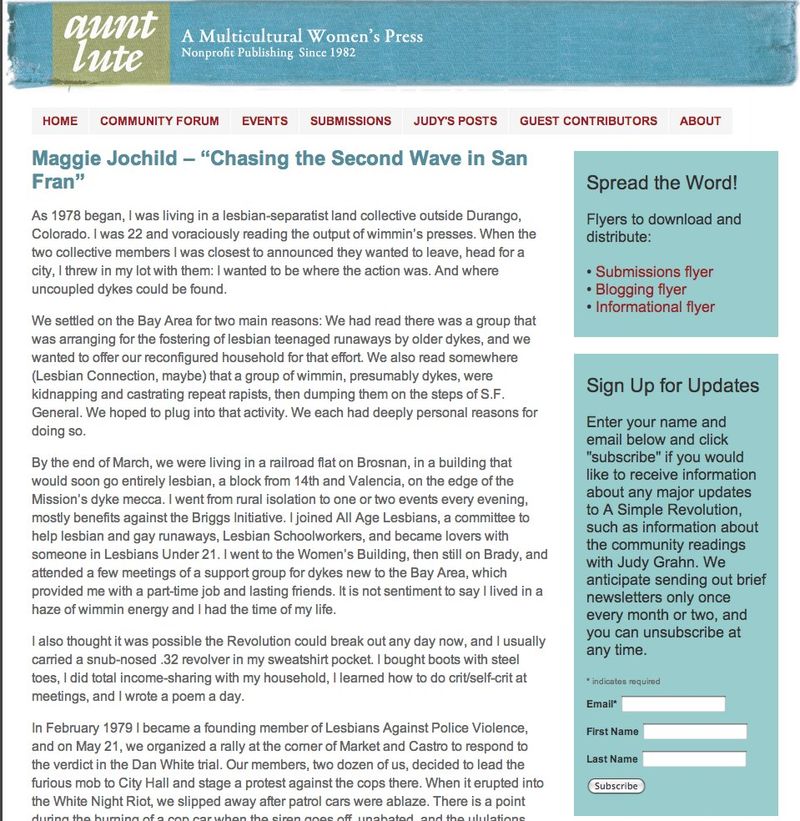 I am deeply honoured to be featured here, because DYKE played such a large role in the lesbian consciousness I developed then and still retain. Our collective household had a subscription that we fought over to be the first to read when it came in. It even prompted a discussion which led me to write Liza Cowan for the first time -- and I got back a Tomato Publications postcard in reply, a major thrill. As someone we both love reminded us, "We ain't got it easy, but we got it."

Right back at you Maggie. You were and are the reader we dreamed of.