DYKE A Quarterly, No. 4, front and back covers

In issue No. 4 we broke form to publish a poster instead of a magazine. Along with the gorgeous 4-color poster, designed by Debbie Drechsler and printed by Tower Press, we sent a magazinelette, envelope sized, with letters and responses. Our readers were baffled. 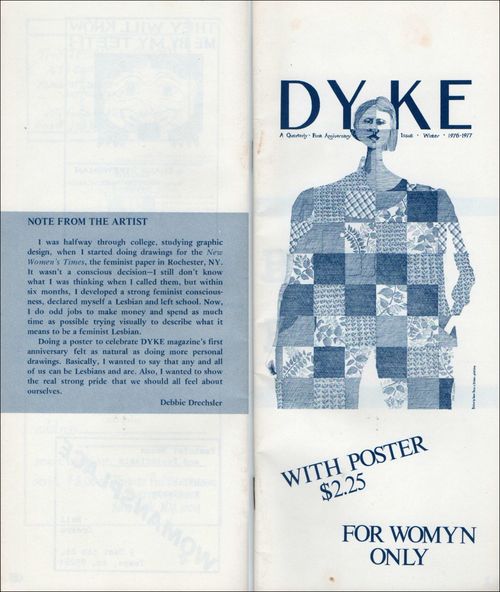 DYKE A Quarterly, Issue No. 4. cover. Illustration by Debbie Drechsler.

NOTE FROM THE ARTIST

I was halfway through college, studying graphic design, when I started doing drawings for the New Women's Times, the feminist paper in Rochester, N.Y. It wasn't a conscious decision - I still don't know what I was thinking when I called them, but within six months, I developed a strong feminist consciousness, declared myself a Lesbian and left school. Now, I do odd jobs to make money and spend as much time as possible trying to visually describe what it means to be a feminist Lesbian.

Doing a poster to celebrate DYKE magazine's first anniversary felt as natural as doing more personal drawings. Basically, I wanted to say that any and all of us can be Lesbians, and are. Also, I wanted to show the real strong pride that we should all feel about ourselves. 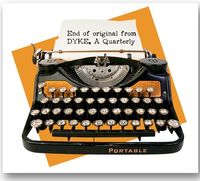 Debbie Drechsler is still working as an illustrator. See her website HERE 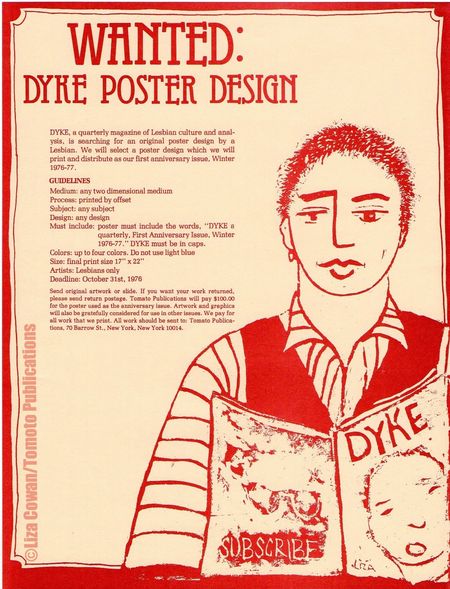 More about our decision to change format HERE