In 1971 I would occasionally have women musicians on my radio show. None were feminists,  certainly their music was not directed to women. Several women sent tapes of their music to me. None of these women had any talent for writing or singing. I used to say over the air that I was looking for women musicians to play on the show, and one day Alix Dobkin  called me and told me that she sang and wrote and would like to be on Electra Rewired. I scheduled her to appear on Dec. 13th, 1971. A few hours before airtime I realized that she was to be my only guest for a five hour live show, and I had never even heard her! We went on the air, we talked for a little while, and then she sang a song she had just written, My Kind Of Girl. I couldn’t believe my ears. She was fantastic. She sang a out a dozen songs, we talked some, and we had to go off the air early because of transmitter difficulties. Two months later we were lovers, four months after that I was fired. By this time Alix had started to write Lesbian songs (A Woman’s Love). We began to explore Lesbian culture and Lesbian Politics. In the fall of 1972 we used to spend many Sunday afternoons at the firehouse on Wooster St, where Lesbian Feminist Liberation was housed. Each week there would be a discussion or presentation of some kind. Sometimes there were music afternoons, where many women would play and sing. It was beautiful to hear so much Lesbian music. 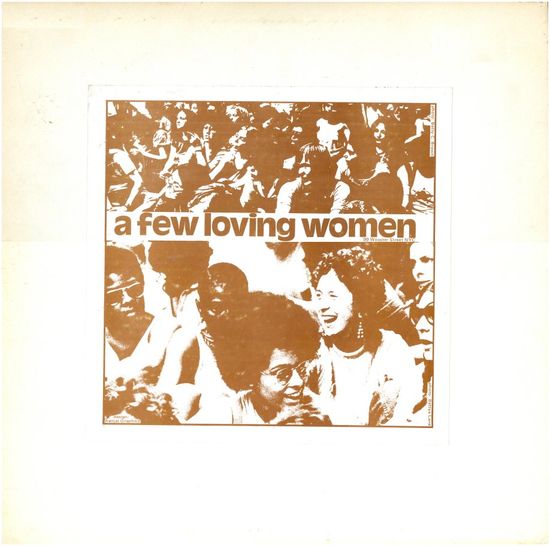 The first Lesbian record album was made by Lesbian Feminist Liberation in 1973. It is called a few loving women and, like the Sunday afternoon music events, it is a collective effort of many different Lesbians. It starts off with I’d Like To Make Love With You, a wonderful song by Margaret Sloan. I love the way Margaret sings. She’s direct and charming and she makes the most out the few chords that she can play on her four string guitar. There are two songs by Martha and Lucy Van Felix Wilde (authorss of the book of Lesbian short stories, The Ripening Fig) Their song, Gladys’s Revelation is one of my favorites on the album. “As Gladys sat praying in temple one day, a thought was disturbing her peace. A strange and terrible passion, my Lord, has taken a hold of my niece. She came to me with a light in her eyes, speaking of love and of joy, tell me, how can I learn to respond like an aunt, when her lover isn’t a boy." (this song can be found also in the book, We Are All Lesbians, published by Violet Press.) Roberta Kosse and her group Women Like Me, sing some good and interesting songs, and one funny one called The Big Orgasm. Some of the songs on the album are not very good. The music and lyrics are often awkward, sometimes over dramatic or too long. I bought this album at the Firehouse when it was hot off the press. I bring it out every once in a while, and I enjoy listening, because it reminds me of those Sunday afternoon. From Outhistory. Gay Activists Alliance History re the firehouse and how the group Lesbian Feminist Liberation began:

Article on a few loving women: