DYKE A Quarterly
Home Facebook About DYKE
SIDE TRIP: What The Well Dressed Dyke Will Wear, Liza's interview in the blog Dyke Duds
Side Trip: The Fifth Street Women's Building Takeover: A Feminist Urban Action, January 1971

DYKE A Quarterly No. 6. p.32: Connecting the dots between Patriarchy and Climate Change

Dykes lead the way connecting the dots between Patriarchy and Climate Change. Earth Changes we sometimes called them. Here is a redone and ever so slightly annotated pull quote from Separatist Symposim, response by Liza Cowan. 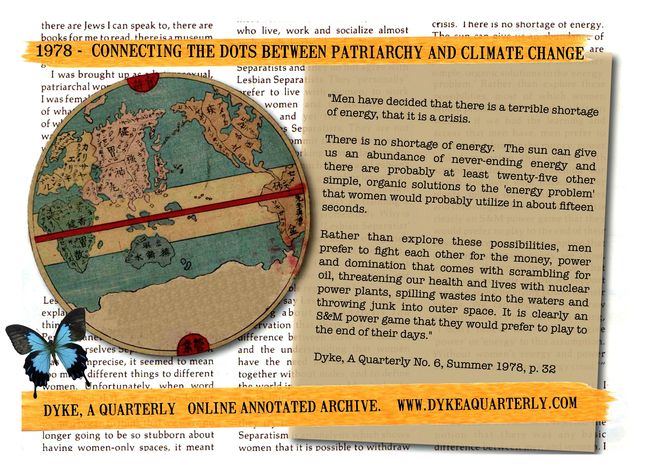 There is no energy crisis. We have a patriarchy crisis. Graphic and text Liza Cowan 2012, exerpted from DYKE A Quarterly No. 6, 1978

"Men have decided that there is a terrible shortage of energy, that it is a crisis.

There is no shortage of energy.  The sun can give us an abundance of never-ending energy and there are probably at least twenty-five other simple, organic solutions to the 'energy problem' that women would probably utilize in about fifteen seconds.

Rather than explore these possibilities, men prefer to fight each other for the money, power and domination that comes with scrambling for oil, threatening our health and lives with nuclear power plants, spilling wastes into the waters and throwing junk into outer space. It is clearly an S&M power game that they would prefer to play to the end of their days." 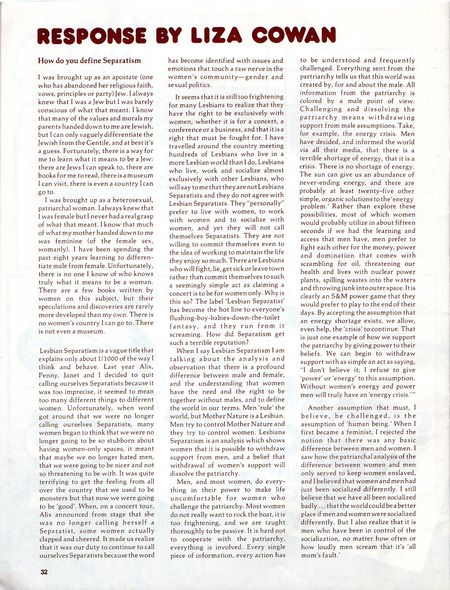