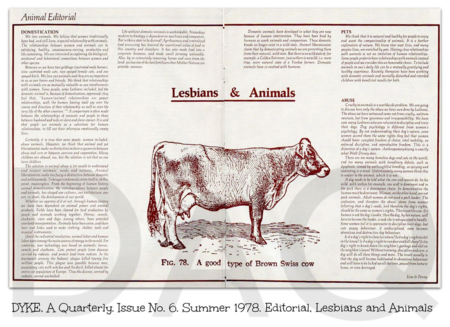 We love animals. We believe that women traditionally have had, and still have, a special relationship with animals. The relationships between women and animals can be satisfying, healthy, consciousness-raising, productive and life sustaining. We are interested in exploring the biological  emotional and behavioral connections between women and other species.

Between us we have to geldings (castrated male horses) nine castrated male cats, two spayed female cats, and one spayed bitch. We love our animas and think they are as important as our lovers and friends. We think that relationships with animals are as mutually viable as our involvements with women.

Some people, some Lesbians included, feel the domestic animal is, because of domestication, oppressed; they feel that, “human/animal relationships are power relationships with the human having total say over the course and directions of that relationship as well as over the very life of the other creature.”* A comparison is often made between the relationships of animals and people to those between husband and wife or slave and slave-owner. It is said that people use animals a a substitute for human relationships, to fill out their otherwise emotionally empty lives.

Certainly it is true that some people, women included, abuse animals. However, we think that animal and pet liberationists make no distinction in their arguments between abuse and care, or between coercion and cooperation. Many children are abused, too, but the solutions is not that no one have children.

The solution to animal abuse is for people to understand and respect animal’s needs and natures. Animal liberationists make too fuzzy a distinction between domestic and wild animals. To be against domestication itself is, at this point, meaningless. From the beginning of human history animal domestication, the interdependence between people and animals, has shaped our cultures, our architecture, our art, in short, the development of our world.

Whether we approve of it or not, through human history we have been dependent on animal power and animal products. Fields have been cleared for food production by people and animals working together. Horses, camels, elephants, oxen and dogs, among others, have provided overland transportation. Animals have been eaten, and their hair and hides used to make clothing, shelter, tools and musical instruments.

Until the Industrial Revolutions, animal labor and human labor were among the main sources of energy in the world. For centuries, war technology was based on animals: horses, camels and elephants. Cats protect people from diseases carried by rodents, and protect food from rodents. In the fourteenth century the bubonic plague killed twenty five million people. This plague was possible because men, associating cats with witches and the devil, killed almost the entire cat population of Europe. This the disease, carried by rodents, spread unchecked.

Life without domestic animals is unthinkable. Nowadays modern technology is dependent on machines and computers. But is this a state to be desired? Agribusiness and centralized food processing has lowered the nutritional value of food in this country and elsewhere. It has also made food into a corporate business, and made small farming untenable. Also, by so extensively removing horses and oxen from the land, we lose one of the best fertilizers that Mother Nature can provide: manure.

Domestic animals have developed to what they are now because of human intervention. They have been bred by humans to work as animals and companions. These domestic breeds no longer exist in a wild state. Animal liberationists claim that by domesticating animals we are perverting them from their natural, wild state. But there is no wild state of, for example, a Golden Retriever, just as there is not wild, i.e. more true, more natural state of a Yankee farmer. Domestic animals have co-evolved with humans.

We think that it is natural and healthy for people to enjoy and want the companionship of animals. It is a further exploration of nature. We know that our lives, and many people’s lives, are enriched by pets. Having close relationships with animals is not an imitation of human relationships. Some people prefer to have relationships with animals instead of people and we consider this an honorable choice. To include animals in one’s daily life can be a mutually gratifying and healthy experience. Recently therapists have been working with domestic animals and mentally disturbed  children with beneficial results for both.

Cruelty to animals is a worldwide problem. We are going to discuss here the abuse we have seen done by Lesbians. The abuse we have witnessed came not from cruelty, not from neurosis, but from ignorance and irresponsibility. We have seen many Lesbians who are reluctant to discipline and train their dogs. Dog psychology is different from women’s psychology. By not understanding their dog’s nature, some women accord them the same rights they feel women should have: complete freedom of choice, total mobility, no enforced discipline, and reproductive freedom. This is s distortion of a dog’s nature. Anthropomorphizing is exactly what Walt Disney does.

There are too many homeless dogs and cats in the world, and too many animals with hereditary defects, such as diplasia, caused by unthoughtful breeding, so spaying and castrating is a must.

Unfortunately many women think this is unfair to the animal, which it is not.

A dog needs to be told what she can and cannot do. In the wild, with wolves for example, one wolf is dominant and in the pack there is a dominance chain. In domestication, the human must be dominant. Women, on the other hand, are not pack animals. Adult women do not need a pack leader. The confusion, and therefore the abuse, stems from women believing that a dog’s needs, and therefore the dog’s rights, should be the same as women’s rights. This is not the case. If a human is not the dog’s leader, then the dog, by her nature, will have to become the leader, a task she is not equipped to handle. Some women feel it is oppressive to discipline their dogs, but cute puppy behavior, if undisciplined, soon becomes obnoxious and destructive dog behavior.

We designed and laidd out each issue very carefully. This was before the era of the personal computer, so our production was very very laborious and time consuming. We started with thumbnail sketches, laying out the whole magazine in teensy squares on a grid on paper. Here's the page for Issue #6. You can see the layout for the editorial. 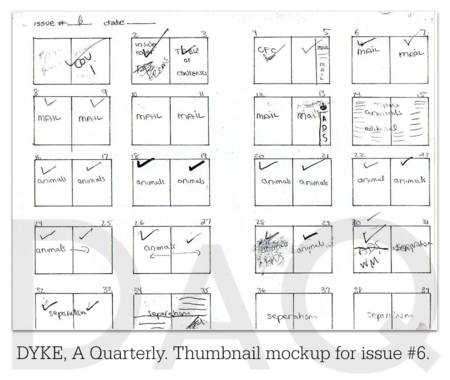 Excellent article very thought prevoking. I agree about training animals. Love a well trained dog. I am a cat person. I did not know about the killing of cats leading to the plague, makes so much sense