DYKE A Quarterly No.1, inside back cover. Ad For Diana Press Publications 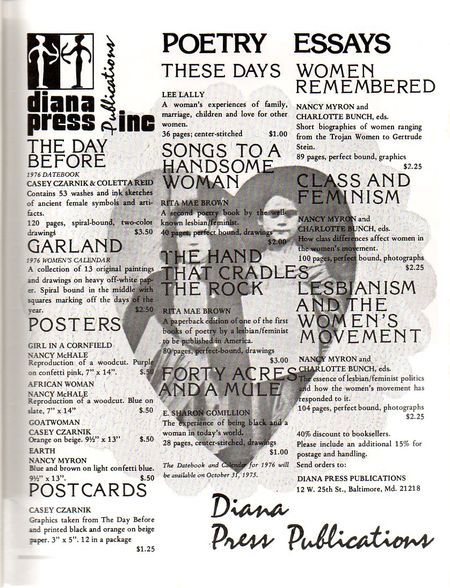 DYKE A Quarterly. Issue #1, Inside Back Cover. Ad for Diana Press Publications

“Tucked away in the basement of a tidy Baltimore townhouse, the DIANA PRESS looks like just another commercial print shop. Inside you find the usual array of sophisticated printing equipment: to Multilith printing machines, and instant plate-maker, a strip-printer for making headlines, an IBM composer for typesetting, a plate burner for making negatives, a Xerox copier, along with beautifully self-styled drafting and layout tables. Yet there are several features that distinguish DIANA PRESS from you average print shop. First, DIANA PRESS combines successful commercial printing (they hold the printing contract for one of the nations’ largest sporting magazines) with publishing and printing of feminist and radical feminist literature. Second, DIANA PRESS is entirely owned and operated by three remarkable women: Coletta Reid, Casey Czarnik and Erma Randall.

The Story of DIANA PRESS goes back to January, 1972 when the press was established and incorporated by a diverse collective of working and middle class women. As Coletta explains it, the press had problems right from the outset. In the first place, the collective lacked any uniform political position. “The name, DIANA PRESS, for example, was agreed upon as a compromise between those who wanted to commemorate weatherwoman Diana Oughton and others who saw Diana as a symbol of ancient women’s culture.” Second, in choosing to operate as an open collective with women working whenever they had the time, the press functioned only haphazardly, with no clear lines of responsibility.

Thirdly, from its very beginning, the women worked in tandem and shared an adjoining office with “a group of leftist hippy men” who did the typesetting and paste-up while the women handled the printing. Together they put out movement work for the price of the cost of paper only – all labor was donated.

By October of the same year, it was apparent that the press could not continue to function in this haphazard manner and still survive as a viable enterprise. Tensions over the conflicts in the collective had already caused most of the women to leave. Realizing the necessity of the situation, the remaining women totally re-organized the operation, asked the “hippy men” to leave, and agreed to give themselves nine months to make the press self-supporting – a goal which they achieved long before their deadline. With money obtained through donations they were able to equip their shop with essential printing machinery. They divided up the print shop into departments and initiated clear lines of responsibility and a production schedule.

The sheer determination of Casey, Coletta and Erma – the 12 hour working day, the material sacrifices – has insured the future of DIANA PRESS. The have successfully competed for bids on commercial work, and although none of them is eager to perpetuate capitalism, it is their commercial business that pays the bills, finances them through print school, and makes the publication of women’s literature possible. Their next goal is to get a Webb press with which they will be able to print any size format, and be no mistake about it, with their determination and energy they’ll have their Webb press, and make a giant stride toward freeing women entirely from male printing establishments."

PS: Check out this amazing online resource: The Library of Radiant Optimism For Let's Re-make The World. You can download The New Women's Survival Catalog, just in case you don't happen have one sitting around the house like we do.