SIDE TRIP: A SIMPLE REVOLUTION- community dialog with Judy Grahan 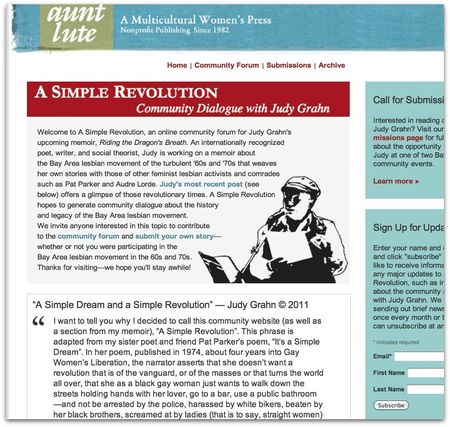 Seems like maybe the time is right for writing our memoirs and gathering our archives. Aunt Lute, a multi- cultual women's Press, is hosting a memoir based interactive historical blog with famed author, theorist, poet Judy Grahan. This community based historical collection about the Lesbian Communities of The Bay Area in the sixties and seventies coincides with the publication of Grahnan's memoir, Riding The Dragon's Breath.

Visit their site for all the exciting information. This is a wonderful use of contemporary digital technologies, and I hope that it will get lots of great material and lots of great publicity.

We are New Yorkers, so we will just cheer from the sidelines.

DYKE, A Quarterly. No. 1: California Diary 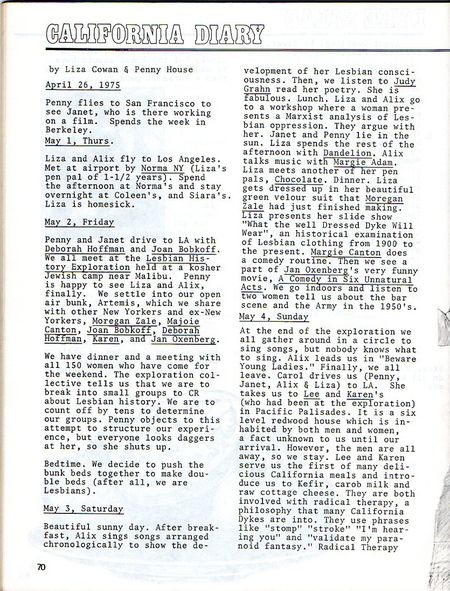 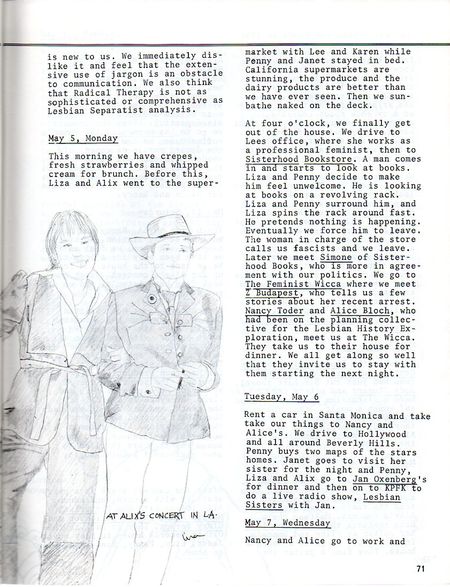 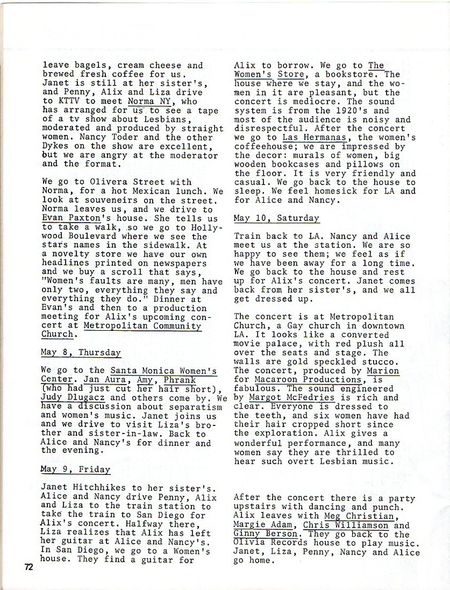 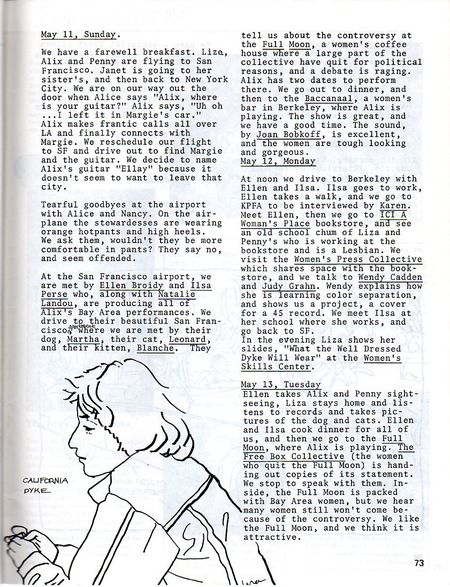 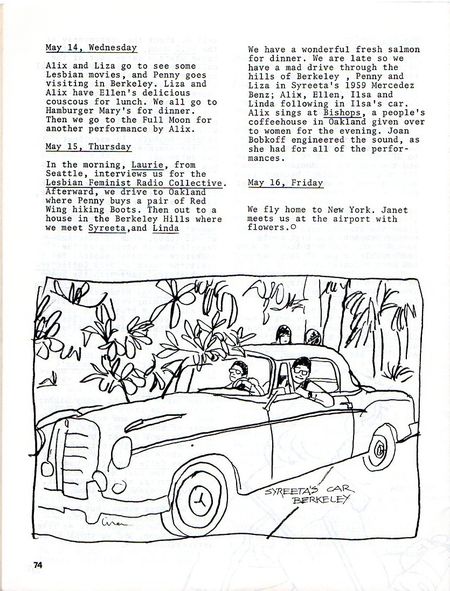 Excerpted Text below in grey. For full text see above. Click to enlarge and make them more readable.

Liza and Alix fly to Los Angeles. Met at airport by Norma NY…

Penny and Janet drive to LA with Deborah Hoffman and Joan Bobkoff. We all meet at the Lesbian History Exploration…we settle into our bunk…which we share with other New Yorkers, Moregan Zale, Majoie Canton, Joan Bobkoff, Deborah Hoffman, Karen and Jan Oxenberg.

We have dinner and a meeting with all 150 women who have come for the weekend. The Exploration collective tells us that we are to break into small groups to CR about  Lesbian history. Penny objects to this attempt to structure our experience but everyone looks daggers at her, so she shuts up….

…Alix sings songs arranged chronologically to show the development of her Lesbian consciousness. Then we listen to Judy Grahn read her poetry, She is fabulous. Lunch. Liza and Alix go to a workshop where a woman presents a Marxist analysis of Lesbian oppression. They argue with her….Alix talks music with Margie Adam. Liza meets another of her pen pals Chocolate. Dinner. Liza gets dressed up in her beautiful green velour suit that Moregan Zale had just finished making. Liza presents her slide show, What The Well Dressed Dyke Will Wear.’” An historical examination of Lesbian clothing from 1900 to the present. Margie Canton does a comedy routine. Then we see a part of Jan Oxenberg's very funny movie, A Comedy In Six Unnatural Acts. We go indoors and listen to two women tell us about the bar scene and the Army in the 1950’s.

At the end of the Exploration we all gather around in a circle to sing songs but nobody knows what to sing. Alix finally leads us in “Beware Young Ladies”.  Snip

…we drive to Lee’s office, where she works as a professional feminist, then to Sisterhood Bookstore. A man comes in and starts to look at books. Liza and Penny decide to make him feel unwelcome. He is looking at books on a revolving rack. Liza and Penny surround him, and Liza spins the rack around fast. He pretends nothing is happening. Eventually we force him to leave. The woman in charge of the store calls us fascists and we leave. Later we meet Simone of Sisterhood books, who is more in agreement with our politics. W go to The Feminist Wicca and meet Z Budapest, who tells us a few stories about her recent arrest. Nancy Toder and Alice Bloch, who had been on the planning collective for the Lesbian History Exploration meet us at The Wicca. They take us to their house for dinner. We all get along so well that they invite us to stay with them starting the next night.

…We drive to Hollywood and all around Beverly Hills. Penny buys two maps of the stars homes. …Liza and Alix go to Jan Oxenberg’s for dinner and then on to KPFK to do a live radio show, Lesbian Sisters, with Jan.

We go to the Santa Monica Women’s Center. Jan Aura, Amy, Phranc (who had just cut her hair short) Judy Dlugacz and others come by. We have a discussion about separatism and women’s music. Janet joins us and we drive to visit Liza’s brother and sister –in-law.

..Alice and Nancy drive Alix and Liza to the train station to take the train to San Diego for Alix’s concert. …snip…after the concert we go to Las Hermanas, the women’s coffeehouse; we are impressed by the décor; mural of women, big wooden bookcases and pillows on the floor. It is very friendly and casual…

Train back to LA…rest up for Alix’s concert. Janet comes back from here sister’s and we all get dressed up.

The concert is at Metropolitan Church, a Gay church in downtown LA. It looks like a converted movie palace, with red plush all over the seats and stage. The walls are gold speckled stucco. The concert, produced by Marion for Macaroon Productions, is fabulous. The sound engineered by Margot McFedries is rich and clear. Everyone is dressed to the teeth, and six women have had their hair cropped short since The Exploration. Alix gives a wonderful  performance and many women say they are thrilled to hear such overt Lesbian music

After the concert there is a party upstairs with dancing and punch. Alix leaves with Meg Christian, Margie Adam, Cris Williamson and Ginny Berson. They go back to Olivia records house to play music. Janet, Liza, Penny, Nancy and Alice go home.

…Liza, Alix and Penny are flying to San Francisco…snip…On the airplane the stewardesses are wearing orange hotpants and high heels. We ask them if they wouldn’t be more comfortable in pants? They say no and seem offended.

At the San Francisco airport we are met by Ellen Broidy and Ilsa Perse, who, along with Natalie Landou, are producing all of Alix’s Bay Area performances….snip…They tell us about the controversy at the Full Moon, a woman’s coffee house where a large part of the collective have quit for political reasons, and a debate is raging. Alix has two dates to perform there. We go out to dinner  and then to the Baccanaal, a women’s bar in Berkeley, where Alix is playing. The show is great and we have a good time. The sound, by Joan Bobkoff, is excellent, and the women are tough looking and gorgeous.

….at noon we go to KPFA to be interviewed by Karen. Meet Ellen, then we go to ICI A Woman’s  Place Bookstore, and see an old school chum of Liza and Penny’s who is working at the bookstore and is a Lesbian.

We visit the Women’s Press Collective which shares space with the bookstore, and we talk to Wendy Cadden and Judy Grahan. Wendy explains how she is learning color separation and shows us a project, a cover for a 45 record. ..snip…in the evening Liza shows her slide, “What The Well Dressed Dyke Will Wear” at The Women’s Skills Center.

Wendy Cadden at the press. Photo by Willyce Kim

….we go to The Full Moon where Alix is playing. The Free Box Collective (the women who quit The Full Moon) is handing out copies of its statement. We stop to talk with them. Inside, The Full Moon is packed with Bay Area women, but we hear many women won’t come because of the controversy We like The Full Moon, and we think it is attractive.

In the morning Laurie from Seattle interviews us for the Lesbian Feminist Radio Collective.  Afterward we drive to Oakland where Penny buys a pair of Red Wing hiking boots. Then out to a house in the Berekely Hills where we meet Syreeta and Linda. We have a wonderful fresh salmon for dinner. We are late so we have a mad drive through the hills of Berkely, Penny and Liza in Syreeta’s 1959 Mercedes Benz; Alix, Ellen, Ilsa and Linda following in Ilsa’s car. Alix sings at Bishops, a people’s coffee house in Oakland given over to women for the evening. Joan Bobkoff engineered the sound, as she had for all the performances.

We fly home to New York. Janet meets us at the airport with flowers.