Side Trip: Left On Pearl

Clip from the new documentary, Left On Pearl,  about the women's occupation of a building at Harvard University in 1971.

SIDE TRIP: A Moment In Her Story, 1970's Boston women's movement. A new documentary film

Check out the KickStarter campaign..

On March 24th I presented a fine cut version of the production at the famous Harvard Square Brattle Theater.  It was a sold out audience and I received a standing ovation.  People were hungry to see this revolutionary history.

This sample video is a small piece of the 90 minute production that I have been working on for two decades. I am inches away from completing it.                                   Starting in 1968, the Second Wave of Feminism rippled across the U.S., demanding expanded possibilities for women of all races and classes.  In the Boston area, students, professionals, community activists and working class mothers came together to demand change. This feature length documentary provides testimony of the movement's transforming energy, creativity and determination. Many of the culture wars being waged today came out of this movement and the backlash it incurred.   The video traces the history of the women's movement coming out of the Anti-war and Civil Rights movements and continuing through the 1970s.

The production includes 20 interviews with movement activists and archival material in the form of photos, videos, posters, music, graphics, newsletters and newspapers from the period. I worked for years to locate this material, asking women for their personal collections and searching through libraries and the web.

This video is not about feminist stars as defined by the media.  The interviewees are the women who fought these struggles in groups and collectives and developed a new way of working together.  They include working class women, black women, Latinas, lesbians, socialist feminists and the radical and cultural feminists of the late 60s and 70s.

I doubt that you have seen this revolutionary force portrayed before.

This is a great time for this video to be available.  It gives an important perspective that shows how this period and these struggles were crucial to changes that occurred in the last part of the 20th century.

Your money will produce a final edit with a music track. This coming year look for it in film festivals.  It is a great teaching tool.

DYKE at The Museum Of Modern Art and The Schleisinger Library. 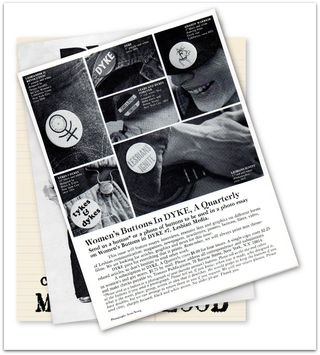 An entire set of the magazines, including the poster, are now at The Museum Of Modern Art, in their Library. They are available to scholars and researchers and the general public by appointment. Here's the LINK to the library.

An entire set of the magazines as well as all the collateral materials - that's the letters, layout boards, mock ups, fliers, and whatever fascinating bits of paper we saved over the years- is now housed at Radcliffe College at The Schlesinger Library. Here's a LINK.