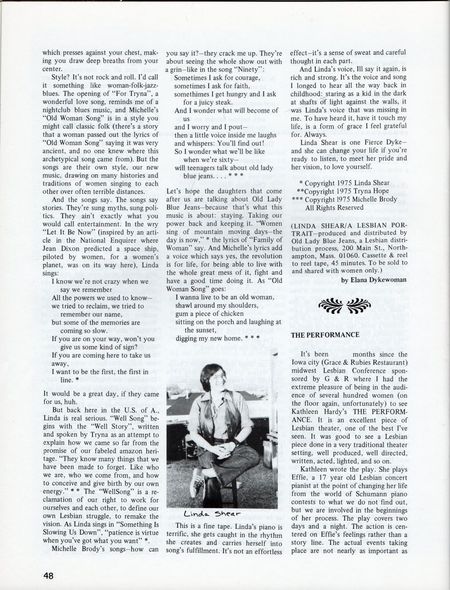 DYKE A Quarterly No. 3. p. 48. Reviews of Linda Shear and The Performance at Grace & Rubies CLICK TO ENLARGE 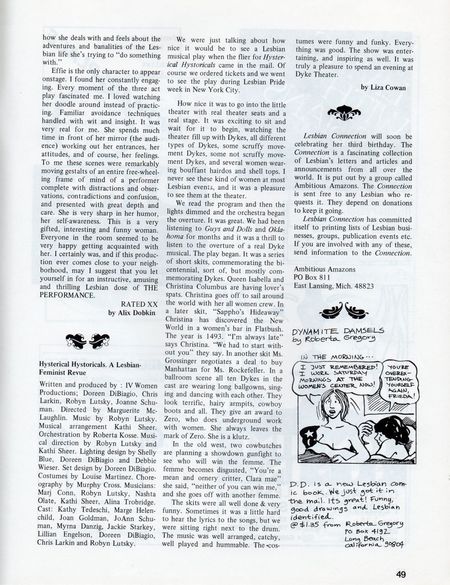 We were just talking about how nice it would be to see a Lesbian musical play when the fleer for Hysterical Hystoricals came in the mail. Of course we ordered tickets and went to see the play during Lesbian Pride Week in New York City.

How nice it was to go into the little theater with real theater seats and a real stage. It was exciting to sit and wait for it all to begin, watching the heater fill up with Dykes, all different types of Dykes, some scruffy movement Dykes, some not scruffy movement Dykes, and several women wearing bouffant hairdos and shell tops. I never see these kind of women at most Lesbian events, and it was a pleasure to see them at the theater.

We read the program and then the lights dimmed and the orchestra began the overture. It was great. We had been listening to Guys and Dolls and Oklahoma for months and it was a thrill to listen to the overture of a real Dyke musical. The play began. It was a series of short skits, commemorating the bicentennial, sort of, but mostly commemorating Dykes. Queen Isabella and Christina Columbus are having  lovers spat. Christina goes off to sail around the world with her all women crew. In a later skit, “Sappho’s Hideaway” Christina has discovered the New World in a women’s bar in Flatbush. The year is 1493. “I’m always late” says Christina “We had to start without you” they say. In another skit, Ms. Grossinger negotiates a deal to by Manhattan for Ms. Rockerfeller. In a ballroom scene all ten Dykes in the cast are wearing long ball gowns, singing and dancing with each other. The look terrific, hairy arpits, cowboy boots and all. They give an award to Zero, who does underground work with women. She always leaves the mark of Zero. She is a klutz.

In the old West, two cowbutches are planning a showdown gunfight to see who will wind the femme. The femme becomes disgusted, “You’re a mean and ornery critter, Calra mae” she said. “Neither of you can win me.” And she goes off with another femme.

The skits were all well done & very funny. Sometimes it was a little hard to hear the lyrics to the songs, but we were sitting right next to the drum. The music was well arranged, catchy, well played and hummable. The costumes were funny and funky. Everything was good. The show was entertaining and inspiring as well. It was truly a pleasure to spend an evening at Dyke Theater. By Liza Cowan