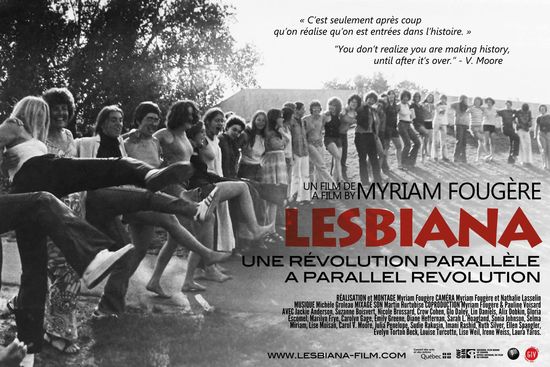 Side Trip: Left On Pearl

Clip from the new documentary, Left On Pearl,  about the women's occupation of a building at Harvard University in 1971.

SIDE TRIP: FILM: The Oldest Lesbian in The World

Nearing 100 years old, a national treasure, Bobbie Staff whimsically exposes a rare and revealing insight into the romantic life of a butch lesbian born in 1913. Accompanied by her long time friend, Sweet Baby J’ai,  Bobbie takes us on a trip down a very steamy memory lane, through photographs and vivid memories of many decades living her life as an out lesbian in New York City and Los Angeles. More HERE
Copyright © 2012 [traipsing thru films,Inc.]. All rights reserved.

Interview with Cathy Cade and JEB

SIDE TRIP: A Moment In Her Story, 1970's Boston women's movement. A new documentary film

Check out the KickStarter campaign..

On March 24th I presented a fine cut version of the production at the famous Harvard Square Brattle Theater.  It was a sold out audience and I received a standing ovation.  People were hungry to see this revolutionary history.

This sample video is a small piece of the 90 minute production that I have been working on for two decades. I am inches away from completing it.                                   Starting in 1968, the Second Wave of Feminism rippled across the U.S., demanding expanded possibilities for women of all races and classes.  In the Boston area, students, professionals, community activists and working class mothers came together to demand change. This feature length documentary provides testimony of the movement's transforming energy, creativity and determination. Many of the culture wars being waged today came out of this movement and the backlash it incurred.   The video traces the history of the women's movement coming out of the Anti-war and Civil Rights movements and continuing through the 1970s.

The production includes 20 interviews with movement activists and archival material in the form of photos, videos, posters, music, graphics, newsletters and newspapers from the period. I worked for years to locate this material, asking women for their personal collections and searching through libraries and the web.

This video is not about feminist stars as defined by the media.  The interviewees are the women who fought these struggles in groups and collectives and developed a new way of working together.  They include working class women, black women, Latinas, lesbians, socialist feminists and the radical and cultural feminists of the late 60s and 70s.

I doubt that you have seen this revolutionary force portrayed before.

This is a great time for this video to be available.  It gives an important perspective that shows how this period and these struggles were crucial to changes that occurred in the last part of the 20th century.

Your money will produce a final edit with a music track. This coming year look for it in film festivals.  It is a great teaching tool. 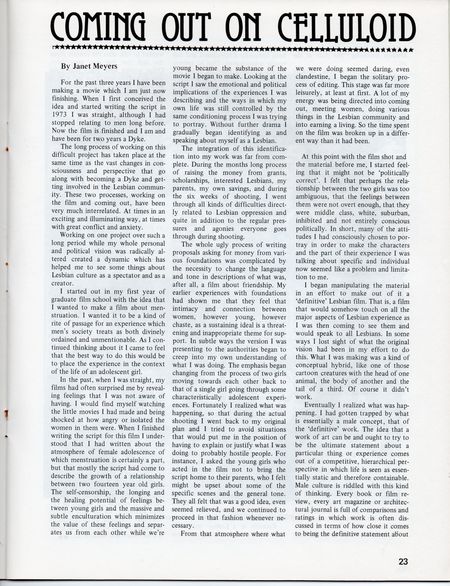 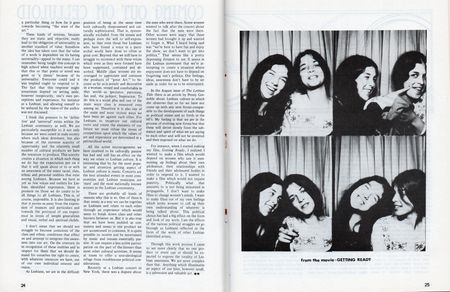 For the past three years I have been making a movie which I am just now finishing. When I first conceived the idea and started writing the script in 1973 I was straight, although I had stopped related to men long before. Now the film is finished and I am have have been for two years a Dyke.

The long process of working on the difficult project has taken place a the same time as vast changes in consciousness and perspective that go along with becoming a Dyke and getting involved in the Lesbian community. These two processes, working on the film and coming out, have been very much interrelated. At time in an exciting and illuminating way, and times with great conflict and anxiety.

Working on one project over such a long period while my whole personal and political vision was radically altered created a dynamic which as helped me to see some things about Lesbian culture as a spectator and as a creator.

I started out in my first year of graduate film school with the idea that I wanted to make a film about menstruation. I wanted it to be a kind of rite of passage for an experience which men's society treats as both divinely ordained and unmentionable. As I continued thinking about it I came to feel that the best way to do this would be to place the experience in the context of the life of an adolescent girl.

In the past, when I was straight, m films had often surprised me by revealing feelings that I was not aware of having. I would find myself watching the little movies I had made and being shocked at how angry or isolated the women in them were. when I finished writing the script for this film I understood that I had written about the atmosphere of female adolescence of which menstruation is certainly a part, but that mostly the script had come to describe the growth of a relationship between two fourteen year old girls. the self-censorship, the longing and the healing potential of feelings between young girls and the massive and subtle acculturation which minimizes the value of these feelings and separates us from  each other while we're young became the substance of the movie I began to make. Looking at the script I saw the emotional and political implications of the experiences I was describing and the ways in which my own life was still controlled by the same conditioning process I was trying to portray. Without further drama I gradually began identifying as and speaking about myself as a Lesbian.

The integrations of this identification into my work was far from complete. during the months long process of raising the money from grants, scholarships, interested Lesbians, my parents, my own savings, and during the six weeks of shooting, I went through all kinds of difficulties directly related to Lesbian oppression and quite in addition to the regular pressures and agonies everyone goes through during shooting.

The whole ugly process of writing proposals asking for money from various foundations was complicated by the necessity to change the language and tone in descriptions of of what was, after all, a film about friendship. My earlier experiences with foundations had shown me that they feel that intimacy and connections between women, however chaste, as a sustaining ideal is a threatening and inappropriate theme for support. In subtle ways the version I was presenting to the authorities began to creep into my own understanding of what I was doing. The emphasis began changing from the process of two girls moving towards each other back to that of a single girl going through some characteristically adolescent experiences. fortunately I realized what has happening, so that during the actual shooting I went back to my original plan and I tried to avoid situations that would put me in the position of having to explain or justify what I was doing to prob ably hostile people.  for instance, I asked the young girls who acted in the film not ot bring th script home to their parents, who I felt might be upset about some of the specific scenes and general tone. They all felt that was a good idea even seemed relieved, and we continued to proceed in that fashion whenever necessary.

SIDE TRIP: OUTCOMES, LGBTQ Stories from the Hudson Valley, with Alix Dobkin. 2012

Alix talks about coming out. I am grateful that our stories are being recorded for herstory.

For more about the film see their Facebook Page

DYKE A Quarterly, NO 2: DYKE Goes To The Movies by Janet Meyers DYKE goes to the movies, by Janet Meyers 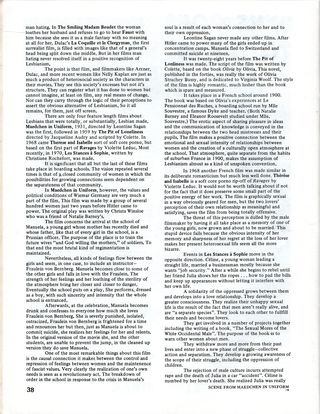 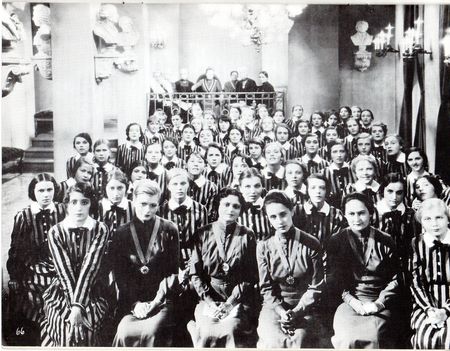 Still from Maedchen In Uniform

DYKE A Quarterly, No. 1 Dyke Salad 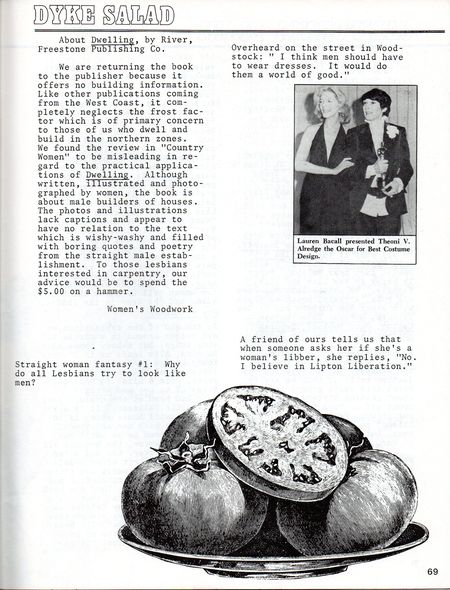 These were random thoughts and ideas. Little bits tossed together. Dyke was published by Tomato Publications so the vegetable theme was there. Why Tomato Publications? Because some survey we read said that the tomato was women's favorite vegetable, although technically it's a fruit. And fruit is a word used to describe queers so it all fit together.

No. 1 was the only issue with this feature.

We loved women in men's suits. So we had to include this image - probably from  Rona Barrett Gossip - of Theoni Aldredge accepting the 1974 Oscar for The Great Gatsby. It was a huge thrill to see a woman in a suit, a tuxedo, at such a public event. Lesbian or not, the subversiveness in itself was remarkable.

Although Aldredge was the costume designer for the film and got the Oscar, the men's suits in The Great Gatsby were designed by Ralph Lauren, whose clothing Liza had written about in the first of her series, "What The Well Dressed Dyke Will Wear" in Cowrie Magazine. She called Lauren's little boutique at Bloomingdales "The Eat Your Heart Out Blazer Dyke Boutique" 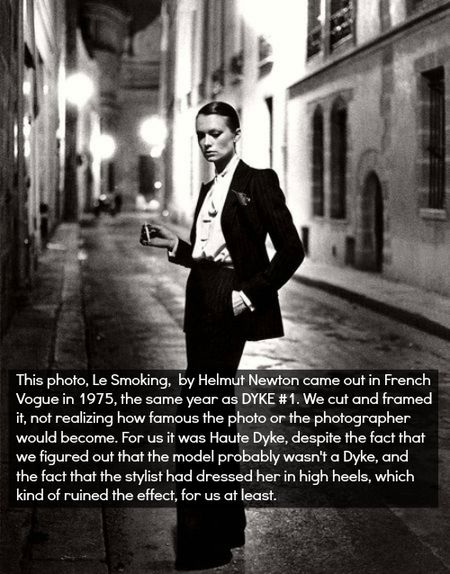 This photo by Helmut Newton came out in French Vogue the same year as this issue of DYKE, 1975. Le Smoking, features a tuxedo by Yves Saint Laurent. We cut it out and framed it, not realizing just how famous the photo, or the photographer, would become. For us it was Haute Dyke, despite the fact that we figured the model probably wasn't actually a Dyke - and the fact that the stylist had dressed her in high heels, which you can't see in this image, but kind of ruined the effect, for us at least. 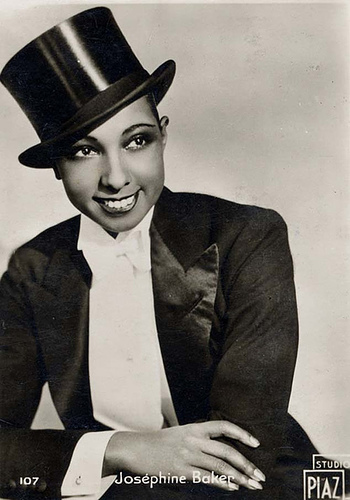 And others, less famous, but whose images were taken by well known photographers like this one by Brassai. 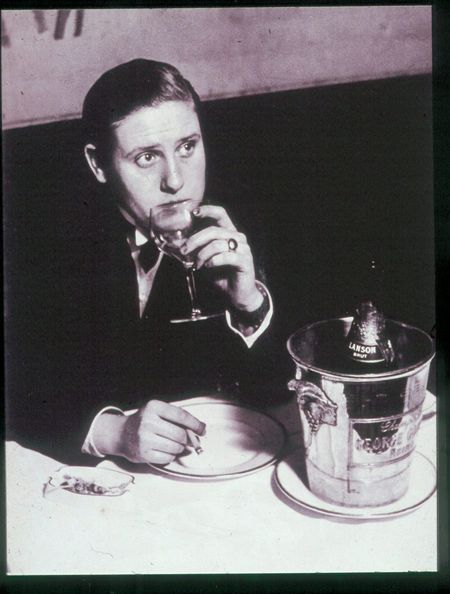 We were inspired by all of these women.