WRITING ABOUT DYKE: SCHOLARS AND PAPERS

SIDE TRIP: Lesbian Separatism in Cowrie and DYKE, a paper by Margo Thompson 2011

Lesbian Separatism in Cowrie and DYKE, A Quarterly

reprinted with permission of the author

At the Lesbian Herstory Archives in Brooklyn, the motto for their publications collection is “two lesbians, one newsletter, anywhere in the world” (http://www.lesbianherstoryarchives.org/tourcoll5.html). The 1970s saw feminist and lesbian feminist publications flourish. There were long-running periodicals that originated with the Daughters of Bilitis, such as Lesbian Tide (Los Angeles), journals of the arts like Amazon Quarterly (Oakland and Cambridge), and single issue outbursts like One to One (New York) and Purple Rage (New York). This paper examines two lesbian feminist journals, Cowrie and DYKE A Quarterly, both edited by Liza Cowan, for their explicitly separatist program.

The journals’ mission was not to persuade or recruit political lesbians, but to consolidate a political, lesbian feminist identity. For Cowrie’s first three issues beginning in spring 1973, it was the newsletter for Community of Women (COW) on the Upper East Side of Manhattan. With the fourth issue, Cowrie became independent and reflected the interests of its editors, Liza Cowan and Carol Hardin. They wrote, “We are anti-heterosexual… We work exclusively with women and for women.” To publish a magazine “by, for, and about Lesbians” was “political in itself,” the editors declared (Cowrie 1, 4, Dec. 1973, p. 3). That is, the lesbians represented in its pages constituted a significant subculture that challenged the gender hegemony of patriarchy. Cowan and Hardin expected their readers were women like themselves: well-educated, New York Jews, from upper middle class families who prized intellectualism and activism.* 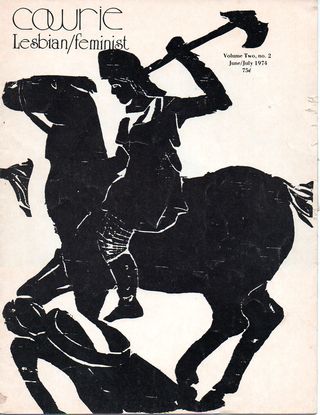 
Cowan left Cowrie after the June/July 1974 issue, and it folded soon afterwards. She left the city and moved with her lover, the folksinger Alix Dobkin, to a small town in upstate New York where they purchased a farmhouse on seventy acres of land with an inheritance from Cowan’s parents. From there, she published DYKE magazine. DYKE was for lesbians only: the cover warned it was “to be sold and shared by women only!” The editors, Cowan and her childhood friend Penny House wrote, “We believe that ‘lesbian culture’ presumes a separatist analysis. If lesbian culture is mixed with straight culture, it is no longer lesbian; it is heterosexual, or heterosocial because energy and time are going to men.” They retained the right to discuss straight culture, however, “to analyze it and in this way preventing it from retarding our growth” (DYKE, A Quarterly 1, 1, Winter 1975-1976, p. 4). Cowan and House were immersed in straight culture, judging from their reading list of periodicals and newspapers printed in the inaugural issue. They assumed that their readers were equally well read, and would turn to DYKE for the lesbian feminist content that was missing from Vogue, TV Guide, and Organic Gardening. Cowrie and DYKE carried articles on a wide range of issues including women in prison, coming out at work, gardening, music, and the topic on which this paper will concentrate, fashion.

American feminists interpreted fashion—the industry and the media that promoted it—as instruments of the patriarchy. Fashion was part of “a culture at war with women’s bodies, constantly seeking to sanitize and deodorize, depilate, stereotype, and control the unpredictable feminine body” (Evans and Thornton, 3). Radical feminists wrote treatises on the manipulations of Madison Avenue, and the unrealistic fantasies and self-doubt which advertisements for clothing and cosmetics sowed. Women who followed fashion were gullible at best, they believed (Scott, 291). Cowan did not share this perspective: While she rebelled against the fashion industry alongside other feminists, she was not hostile to it. Neither did she think that clothing was a trivial concern. Dressing “like herself” was a claim to her gender and sexual identity. Women’s studies scholar Linda M. Scott observed that women of Cowan’s generation viewed fashion as playful, youthful, and self-inventive even as they subjected it to feminist critique (Scott, 251-69). In fact, fashion is a discourse: It signifies, and as such is ripe for deconstruction and subversion through a liberating counter-discourse. This is precisely what Cowan offered in her series of columns titled “What the Well Dressed Dyke Will Wear,” which ran from the second issue of Cowrie (June 1973) to the first issue of DYKE, A Quarterly (Winter 1975-1976).

In brief, the “well dressed dyke” would resist feminine fashions in favor of clothing selected to fit “her politics, her astrological signs, her size, her favorite colors, and her needs” (Cowrie 1, 3:10). Women’s fashions were designed by men to attract male attention, to reflect male fantasies of how women should act and appear. The lesbian required clothing that would deflect the masculine gaze while attracting women’s attention. Lesbians needed ways to become visible to each other. Cowan’s columns were at once descriptive of what she and her friends chose to wear, and prescriptive for her readers. In wording reminiscent of mainstream press trend pieces Cowan wrote, “It seems that many women are growing tired of the Dyke Schlepp [sic] uniform that has been so popular of late, and are wanting to dress more creatively and individually” (Cowrie 1, 3: 11). As this trend continued, she predicted, “there will begin to evolve a true Dyke fashion, just as Dyke music and theater is [sic] already beginning to appear” (Cowrie 1, 5: 22). The magazines printed letters from readers that enthusiastically agreed or disagreed with the author’s point of view, including whether discussions of clothing were politically relevant. 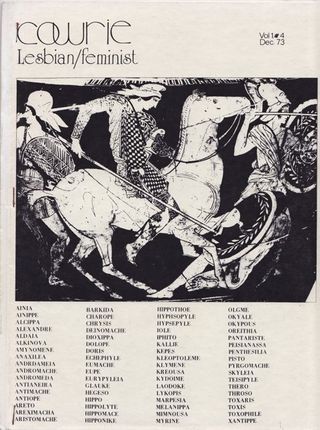 Cowrie and DYKE advanced a dual-pronged subversive strategy in the “Well Dressed Dyke” columns that reflected Cowan’s lesbian separatist convictions. It was economic: women should find ways to deny male-run businesses their money. They could make their own clothes, or seek out craftswomen who could design and tailor clothing that was comfortable and flattering to a woman’s body. It was historical: Cowan sketched an alternate history of women’s fashion from the Amazons to the free thinking women of Paris’s Left Bank in the 1920s. Both of these propositions incorporated complexities that quickly surfaced in correspondence from readers. Class privilege was assumed in the recommendation that women have clothes tailor-made for them. On the historical front, aside from the essentialism implicit in the notion of a hidden women’s history, the mannish sartorial style of the Left Bank ladies whom Cowan favored seemed too prescriptive and impractical for lesbians who favored long hair and dresses or needed to wear such a uniform at work.

Continue reading "SIDE TRIP: Lesbian Separatism in Cowrie and DYKE, a paper by Margo Thompson 2011" »